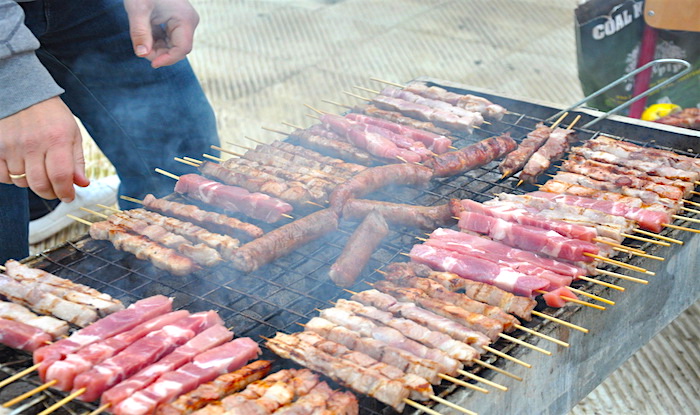 “Tsiknopempti” is the name of the day in Greece that marks the official start of the carnival festivities. The day is celebrated on a Thursday and consists of the words “tsikna” (smell of burning food) and Pempti (which is Greek for Thursday).

According to the Greek Orthodox tradition, the people who await the fourty-day fast before Easter and who respect the weekly fasts of Wednesday and Friday, have this particular Thursday to eat as much meat as they want and to party infinitely, right before the holy days begin.

The name of “Tsiknopempti” originated from the fact that on that particular day, in many places around Greece, people used to melt the fat from pigs, while groups gathered in homes to barbecue meat. The dispersed smell of burning meat from any household that could afford meat, led to naming the day “Tsiknopempti.”

The custom is said to be originated in the Bacchic feasts of Ancient Greeks and Romans, that survived with several changes until the christian years. The eating and drinking of this Thursday, remind of practices that are related to Earth’s euphoria and that are combined with the christian tradition, that prepare the faithful ones for the Easter fast.

In the older days, aside from the burning meat, the tradition also dictated dressing up and teasing. In the villages, people walked around in groups from house to house, knocking on doors and asking for a treat and some wine, which was consumed on the road. The people who offered the wine and treat, had to also leave their homes, and join the group to party along. The custom also included “minor damages” in the outside of the houses, as the celebrants knocked down flower pots to spill the dirt, smeared their faces and partied on until the next morning.

Other countries that celebrate a similar holiday are the Germans with the “Weiberfastnacht,” the French with “Mardi Gras” and the Spanish with the “Jueves Lardero.” The same day is carried out with similar christian traditions in Poland and Hungary.